The Italian Army in North Africa, 1940-43: Luck Was Lacking, But Valor Was Not (Hardcover) 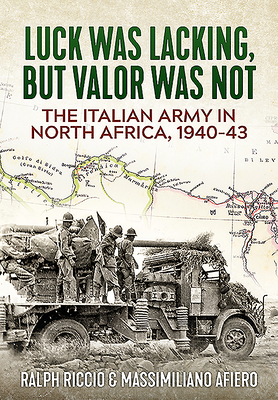 The Italian Army in North Africa, 1940-43: Luck Was Lacking, But Valor Was Not (Hardcover)


Backordered. There will likely be a delay in getting this book
This book begins by examining a number of factors relating to the Italian army's performance in the desert, including assessments of the Italian soldier, leadership, training, organization and structure, equipment, the supply situation in North Africa, the ability of the Italian air force to support ground operations, and an appreciation of Italo-German relations in North Africa.

The book then describes the combat operations of Italian forces in the desert beginning with the early Italian advance from Libya into Egypt in September 1940 and ending with the final Italian surrender to the Allies in Tunisia in May 1943.

The extensive appendices focus heavily on organization and equipment, with tables comparing Italian, British and German armor and artillery in the desert.

Taken as a whole, this book presents an account of Italian ground operations in North Africa, from the time of their initial trouncing at the hands of the British Western desert Force in early 1941, through the see-saw battles of 1941 and 1942 when the combined Italo-German forces battled with the British, through the decimation of the Italian forces during the El Alamein battles in late 1942, and finally with the retreat to Tunisia and surrender of all Axis forces there in May 1943.

This book is the first English-language work to address in a systematic way the contributions of the Italian army to the North African campaign, and challenges the conventional wisdom that the German Afrika Korps was the preeminent Axis force in the desert.