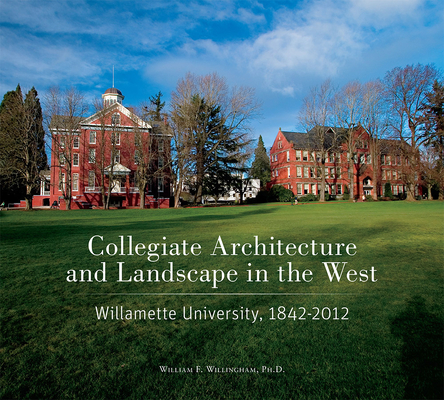 In the story of how campus architecture evolved in the nation, and in microcosm at Willamette University speci­fically, we see a rich reflection of our society and of education in general. We see how the building of a campus not only re‑flects the educational aims and culture of a period, but also impacts the future educational missions of an institution. From the wood-framed Oregon Institute through the creation of the LEED Gold Certi­fied Ford Hall, the captivating details behind the formation of today’s beautiful campus show how intricately the physical plant is intertwined with the work, the institutional mission, the ­finances, and the individuals who shaped the progress of the University.

While there is plenty to satisfy those with an architectural bent, there is much here for the general reader as well. Generations of people come to life, people from whom we are separated not only by time, but by “the times.” And yet, in their humanity and deep commitment, we can catch glimpses of who we are today. Willamette University literally inhabits the visions of those who came before. We also see that in a very real way, the challenges, disappointments, and triumphs of people who no longer walk these grounds are built into the Willamette physical plant. Once one has been through this journey, the reader will never look at the built environment of Willamette, or of any campus, in the same way again.

William Willingham received his Ph. D. in Early American History from Northwestern University and has taught and practiced history broadly. His research and publications are in the field of early American history, water resources development, architectural history, historic preservation, and family and community history. His major publications include Waterpower in the Wilderness: A History of the Bonneville Lock and Dam (1987), Classic Houses of Portland, Oregon, 1850-1950 (co-author, 1999), Starting Over: Community Building on the Eastern Oregon Frontier (2005), Two Centuries of Experience in Water Resources Management: A Dutch-U.S. Retrospective (co-author and editor, 2014), and Grit and Ink: An Oregon Family’s Adventures in Newspapering, 1908-2018 (2018).


“Willingham is an astute architectural critic able to clearly decipher the overlapping currents of Georgian-Colonial traditionalism and various modern architectural styles that characterize many of Willamette’s buildings. This book is a pleasure to read describing a complex ever-changing landscape.” – Thomas Hubka, Professor of Architecture, emeritus, University of Wisconsin, Madison


“Willingham has done a masterful job of research and writing. It is only through Willingham that I have learned the extent of Pietro Belluschi’s sincere concern for his design influence on the campus and on the students. His clarity of design, attention to detail, proper proportions and simplicity of materials are early examples of Pietro’s life-long standards for his architecture. I am confident that my father would be very proud and pleased to be so precisely and properly represented in this inspiring book. Bill Willingham should be commended for this effort.” – Anthony Belluschi, FAIA


“Willingham interweaves several narratives in this engaging book. He provides a wealth of information and analysis concerning the cultural, educational, and architectural history of Oregon and the Paci­fic Northwest, based on the story of a particular university and its campus.” – Roger Hull, Professor of Art History, emeritus, Willamette University