The Scots Irish of Early Pennsylvania: A Varied People (Paperback) 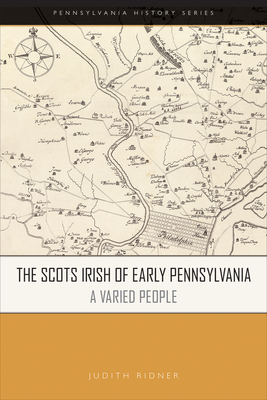 The Scots Irish of Early Pennsylvania: A Varied People (Paperback)

By Judith A. Ridner

The Scots Irish were one of early Pennsylvania’s largest non-English immigrant groups. They were stereotyped as frontier ruffians and Indian haters. In The Scots Irish of Early Pennsylvania, historian Judith Ridner insists that this immigrant group was socio-economically diverse. Servants and free people, individuals and families, and political exiles and refugees from Ulster, they not only pioneered new frontier settlements, but also populated the state’s cities—Philadelphia and Pittsburgh—and its towns, such as Lancaster, Easton, and Carlisle.

Ridner provides a much-overdue synthesis and reassessment of this immigrant group, tracing a century of Scotch-Irish migration from 1720 to 1820. These men and women brought their version of Ulster to the colonies in their fierce commitments to family, community, entrepreneurship, Presbyterianism, republican politics, and higher education. The settlements they founded across the state, including many farms, businesses, meetinghouses, and colleges, ensured that Pennsylvania would be their cradle in America, and these settlements stand as powerful testaments to their legacy to the state’s history and development.

Judith Ridner is an Associate Professor of History at Mississippi State University and author of A Town In-Between: Carlisle, Pennsylvania and the Early Mid-Atlantic Interior.