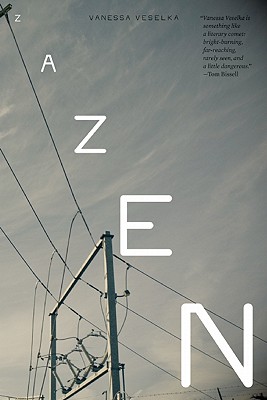 
This book has been declared out of stock indefinitely, so we are unlikely to be able to get it.
Somewhere in Della's consumptive, industrial wasteland of a city, a bomb goes off. It is not the first, and will not be the last. Reactions to the attacks are polarized. Police activity intensifies. Della's revolutionary parents welcome the upheaval but are trapped within their own insular beliefs. Her activist restaurant co-workers, who would rather change their identities than the world around them, resume a shallow rebellion of hair-dye, sex parties, and self-absorption. As those bombs keep inching closer, thudding deep and real between the sounds of katydids fluttering in the still of the city night, and the destruction begins to excite her. What begins as terror threats called in to greasy bro-bars across the block boils over into a desperate plot, intoxicating and captivating Della and leaving her little chance for escape. Zazen unfolds as a search for clarity soured by irresolution and catastrophe, yet made vital by the thin, wild veins of imagination run through each escalating moment, tensing and relaxing, unfurling and ensnaring. Vanessa Veselka renders Della and her world with beautiful, freighting, and phantasmagorically intelligent accuracy, crafting from their shattered constitutions a perversely perfect mirror for our own selves and state.

Vanessa Veselka (Portland, OR) has been, at various times, a teenage runaway, a sex-worker, a union organizer, a student of paleontology, an expatriate, an independent record label owner, a train-hopper, a waitress, and a mother. Her work has appeared in bust, bitch, maximum rock 'n' roll, and elsewhere. Zazen is her first novel.

Vanessa Veselka is something like a literary comet: bright-burning, far-reaching, rarely seen, and a little dangerous.Tom Bissell

At turns hilarious, unsettling, and improbably sweet, Veselka's debut is, above all, a highly engaging, and totally unique experience, which will have you re-reading passages and dog-earing pages. But best of all, in the end, Zazen is that rare novel which dares to be hopeful in the face of despair, and succeeds.Jonathan Evison, author of All About Lulu and West of Here

[A] taut...Veselka's prose is chiseled and laced with arsenic observations...Veselka makes a case for hope and meaning amid sheer madness.Publishers Weekly