Notes on Directing: 130 Lessons in Leadership from the Director's Chair (Paperback) 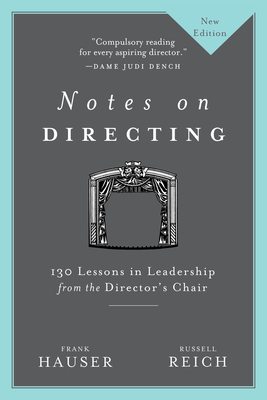 Notes on Directing: 130 Lessons in Leadership from the Director's Chair (Paperback)


Backordered. There will likely be a delay in getting this book
Some years ago, Frank Hauser, then a retired freelance director, and writer Russell Reich, his former student, self-published Notes on Directing in hardcover. It was immediately acclaimed as “a gem-witty and full of insight;” “so sensible, so complete, and so right;” and “amazingly illuminating” by the likes of Judi Dench, Edward Albee, and Terry Teachout. Gathered over Frank Hauser's long career, and polished to a sharp edge by Russell Reich, the 130 "Notes" address a wide range of topics, from understanding the script and defining the director's role, to casting, how to handle a first read-through of a script, rules for rehearsal, how to talk to actors, how to get a laugh, and the key elements of staging. Filled with enduring good advice expressed in assertive, no-nonsense language, and supported with explanatory commentary, insightful quotes and examples, and six valuable appendices, this deceptively slim book has the impact of a privileged apprenticeship, providing deep insight into the hidden process of creating a live, shared experience. For the student or professional engaged in a directing or acting career, the executive or manager looking for inspiring new ideas on leadership, or the arts lover wanting insight into the creative process, this book will be an invaluable experience. This new edition includes an interview with the co-author.
Frank Hauser was a drama producer for the BBC and formed the Meadow Players at Oxford. He was director of the Oxford Playhouse for 16 years, during which many of his productions were subsequently seen in London and New York. Russell Reich is a writer, creative director, and coauthor of Notes on Cooking and Notes on Teaching. He is a former visiting artist-in-residence at Harvard University, artistic associate at the Circle Repertory Company in New York, member of the Circle Rep Director's Lab, and founding artistic director of the Holmdel Theatre Company. He lives in New York.
"This book is a gem — witty and full of insight. It should be compulsory reading for every aspiring director."  —Dame Judi Dench

"This book is so sensible, so straightforward, so complete, and so 'right' that somebody might think it was not serious. They would be wrong."  —Playwright Edward Albee, 3X Pulitzer Prize Winner

"The next best thing to working with Frank Hauser is to read his book. His wise and pithy observations on acting and rehearsing don't age, reminding me how much I have learned from him."  —Sir Ian McKellen

"This book is filled with smart, useful, thoughtful advice, born of years of service to an elusive craft. How rare it is for two of our own to talk so shrewdly, candidly and succinctly about the process of making a production. I learned a lot from this remarkably straightforward book, and I debated with it. It is invaluable."  —Director Mark Lamos

"It's a testament to the value of these modestly titled Notes that they go far beyond their wonderful applicability to the staging of a play or the creation of a film. This book will be a delightful read for nearly anybody, filled as it is with humor and life lessons, and the priceless insight of two keen observers of human behavior." — Scenic Designer Robin Wagner, Multiple Tony Award Winner

"Blunt, funny, utterly relevant, amazingly illuminating. I've never read anything that taught me more about the theater in so short a space . . . deserves to earn at least a million dollars, if not a Nobel Peace Prize."  —Terry Teachout, Drama Critic, The Wall Street Journal