A Year in the Life of Death: Poems Inspired by the Obituary Pages of the New York Times (Paperback) 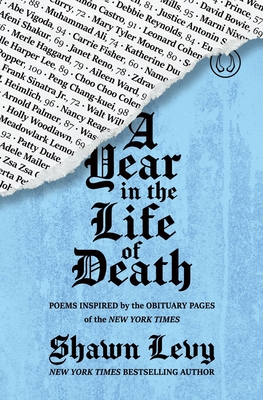 A Year in the Life of Death: Poems Inspired by the Obituary Pages of the New York Times (Paperback)


On Our Shelves Now as of 24 Hours Ago. Call first to confirm.
When Shawn Levy had the notion to write a poem each day for a year, inspired by the obituary pages of The New York Times, he had no way of knowing that the year in question, 2016, would claim so many of the world's most iconic figures. His project became, in effect, a vehicle for surveying the breadth of the twentieth century: Titans from all fields of endeavor, lives that contained one quirky but insoluble achievement, and people who had special significance in his own life. From Nancy Reagan to Muhammad Ali, David Bowie to Arnold Palmer, Prince to Janet Reno, Antonin Scalia to Mary Tyler Moore, and including a Black Miss America, an obsessive weather reporter, the nurse famously kissed by a sailor on VJ Day, the man who put the @ in your email address, and the last man to walk on the moon, the lives recollected in these one hundred poems provoke compassion, sorrow, outrage, surprise, nostalgia, even laughter.

This book is a wailing song, with side eye when and where you need it. These poems are a resuscitation of art and heart. -Lidia Yuknavitch, author of Verge

I'm grateful to Shawn Levy for reminding me what a generous, evocative exchange the newspaper obituary can be. -Elena Passarello, author of Animals Strike Curious Poses

With his gimlet eye and big heart, Levy takes us on a backstage tour of our own popular culture. -Dobby Gibson, author of Little Glass Planet