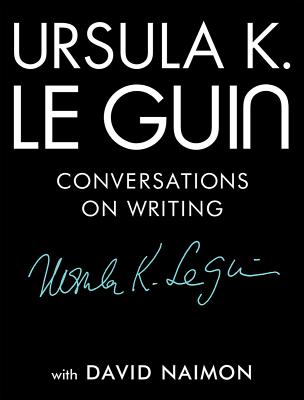 Ursula K. Le Guin discusses her fiction, nonfiction, and poetry?both her process and her philosophy?with all the wisdom, profundity, and rigor we expect from one of the great writers of the last century.

When the New York Times referred to Ursula K. Le Guin as America’s greatest writer of science fiction, they just might have undersold her legacy. It’s hard to look at her vast body of work?novels and stories across multiple genres, poems, translations, essays, speeches, and criticism?and see anything but one of our greatest writers, period.

In a series of interviews with David Naimon (Between the Covers), Le Guin discusses craft, aesthetics, and philosophy in her fiction, poetry, and nonfiction respectively. The discussions provide ample advice and guidance for writers of every level, but also give Le Guin a chance to to sound off on some of her favorite subjects: the genre wars, the patriarchy, the natural world, and what, in her opinion, makes for great writing. With excerpts from her own books and those that she looked to for inspiration, this volume is a treat for Le Guin’s longtime readers, a perfect introduction for those first approaching her writing, and a tribute to her incredible life and work.

Ursula K. Le Guin published twenty-one novels, eleven volumes of short stories, four collections of essays, twelve books for children, six volumes of poetry and four of translation, and has received the Hugo, Nebula, Endeavor, Locus, Tiptree, Sturgeon, PEN/Malamud, and National Book awards and the Pushcart and Janet Heidinger Kafka prizes, among others. In recent years she received lifetime achievement awards from the World Fantasy Awards, Los Angeles Times, Pacific Northwest Booksellers Association, and Willamette Writers, as well as the Science Fiction and Fantasy Writers of America Grand Master Award, the Library of Congress “Living Legend” award, and the National Book Foundation Medal for Distinguished Contribution to American Letters. Le Guin was the recipient of the Association for Library Service to Children’s May Hill Arbuthnot Honor Lecture Award and the Margaret Edwards Award. She lived in Portland, Oregon, and her website is www.ursulakleguin.com.

David Naimon is a writer and host of the radio show and podcast Between The Covers in Portland, Oregon. His work has appeared in Tin House, AGNI, Fourth Genre, Boulevard, ZYZZYVA, and elsewhere.  His writing has been reprinted in The Best Small Fictions 2016 and cited in the 2016 Pushcart Prize volume, The Best American Essays 2015, and The Best American Travel Writing 2015.  His podcast and writing can be found at: www.davidnaimon.com

In her introduction to this volume, Le Guin states that the good interview is a conversation between people who have thought about what they’re talking about. That’s a perfect description of this thoughtful collection . . . 'What I really like to do,' Le Guin states, 'is talk shop.' Readers are privileged to listen while she does.
— Booklist

Candid and perceptive
last words by a treasured writer.
— Kirkus

An enlightening conversation about the writing process. Both authors adopt the tone of artisans discussing their craft, and each’s delight at debating with a like-minded professional is evident throughout. . . [Le Guin's] expansive knowledge of the SF genre provides, most strikingly, a sharp perspective on how its female practitioners have too often been forgotten in favor of their male contemporaries. Her rapport with Naimon results in an exchange that is both informative and charming.
— Publishers Weekly

Fueled by Naimon's incisive questions and peppered with excerpts from Le Guin's books, these wide-ranging interviews are a treat for both longtime fans and newcomers to her work.
— Shelf Awareness

In this small, beautifully crafted book, the conversations range from style to point of view to genre to why we should use 'they' as singular. . . . Together, Le Guin and Naimon demonstrate engagement at its finest.
— World Literature Today

For nuggets of fiery wisdom and plunges into literary form and purpose from the late, great Ursula K. Le Guin, look to Tin House’s newly published Conversations on Writing.