Spiritual Meanings of the Hajj Rituals: A Philological Approach (Paperback) 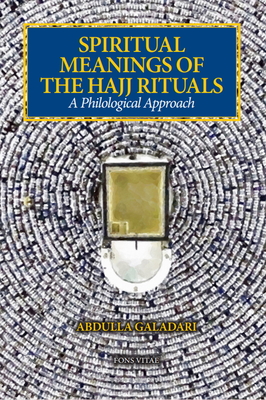 Spiritual Meanings of the Hajj Rituals: A Philological Approach (Paperback)


We can usually get this book in 3 to 7 days, except during a pandemic. We are doing our best
Countless juristic works have been composed on the Hajj and the Umrah—the major and minor Islamic pilgrimage to Mecca—with meticulous attention to the proper manner of performing their rites in keeping with the relevant legal rulings derived from the Qur’an and the Prophetic Sunnah. Far fewer works, however, have been devoted to the inner meanings of these rituals and the spiritual benefit and significance they hold for the pilgrim. Approaching the topic through an etymological and historical analysis of the words used to describe the pilgrimage rites, and tracing the semantic links among relevant terms as they appear in the Jewish, Christian, and Islamic scriptures, this insightful and fascinating study seeks to unlock some of the mysteries hidden within the Hajj rituals. In so doing, it shows that, far from being mere re-enactments of stories from antiquity and their exoteric meanings, these rites function as symbols of inner realities, both earthly and heavenly, and as stages in the pilgrim’s spiritual journey from death to resurrection and hence, to spiritual enlightenment.
Abdulla Galadari is an Associate Professor of Islamic Studies at Khalifa University. His area of interest is in Qur’anic hermeneutics, philology of the Qur’an, and its possible engagement with Near Eastern traditions in Late Antiquity. He also works in comparative theology and religion. Galadari is the author of Qur’anic Hermeneutics: Between Science, History, and the Bible (2018) and Metaphors of Death and Resurrection in the Qur’an: An Intertextual Approach with Biblical and Rabbinic Literature (2021).
Endorsement for the current book:

“Religion without spirituality is like marriage without love. Spiritual Meanings of the Hajj Rituals is a labor of love that through careful analysis of the intricate details of the Hajj uncovers its deeper meaning. This work succeeds in being both thorough academic scholarship and also a vibrant and flowing text. A careful philological study of ancient Hebrew, Aramaic and Greek sources uncovers how deeply rooted are the parallels between the Islamic Hajj to Mecca and the ancient pilgrimage to the Temple in Jerusalem as interpreted in both Judaism and Christianity. This connection illuminates the commonality of the traditions and spirituality of the Abrahamic religions. Indeed, the underlying meaning that emerges of the Hajj, a journey in which the ego and self die in order for the soul to be reborn in the surrender to God is a universal message that reflects the longings and aspirations of spiritual searchers of all religions. As a Talmud scholar I am awed and enthralled by the insights in the book.” —Rabbi Dr. Yakov Nagen, Director of Ohr Torah Stone’s Blickle Institute for Interfaith Dialogue Endorsements

For Metaphors of Death and Resurrection in the Qur’an: An Intertextual Approach with Biblical and Rabbinic Literature:

“This innovative and thought-provoking work uses the method of ‘intertextual polysemy’ to uncover the richness of the Qur'an's references to death and resurrection. Abdulla Galadari carefully analyses the Qur'an's Biblical subtext and its theological strategies. He thereby uncovers new meanings in Islam's scripture. A must-read for students and scholars of the Qur'an and the Bible.” —Gabriel Said Reynolds, Crowley Professor of Islamic Studies and Theology, University of Notre Dame, USA

“In both method and content, this important book reads the Qur'an within its broader religious background, both diachronically and synchronically. It will set new standards and fresh challenges to comparative research, for both Qur'anic and late antique studies.” —Guy G. Stroumsa, Martin Buber Professor Emeritus of Comparative Religion, The Hebrew University of Jerusalem, Israel and Professor Emeritus of the Study of the Abrahamic Religions, Oxford University, UK

“This is the first detailed monograph study of death in the Qur'an. Galadari has done Qur'anic studies a great service. This book is a must-read.” —Walid Saleh, Professor, University of Toronto, Canada

“Abdulla Galadari treats a well-known topic through a new and innovative lens that opens up a fresh approach to reading the Qur'an.” —Reuven Firestone, Regenstein Professor in Medieval Judaism and Islam, Hebrew Union College, USA

Endorsements for Qur’anic Hermeneutics: Between Science, History, and the Bible:

“Here is a Muslim voice that will surprise many with what it has to say about the Qur'an and the Bible. Displaying an impressive familiarity with a wide array of scholarship and sources, Abdulla Galadari proposes bold and provocative interpretations of Jewish, Christian, and Islamic texts that will delight some and disturb others. This book opens up exciting new ways of thinking about the relationships among the monotheistic traditions.” —John Kaltner, Virginia Ballou McGehee Professor of Muslim-Christian Relations, Rhodes College, USA


“This is a learned reading of the Qur'an in its Near Eastern environment. It is a welcome addition to the literature on the Qur'an.” —Walid Ahmad Saleh, Professor of Islamic Studies, University of Toronto, Canada


“Galadari brings a unique voice to Qur'anic exegesis. He combines a thorough knowledge of the Arabic language with a mastery of the cognate language of Hebrew, which leads him to make less obvious and yet dramatic connections that provide a key to novel interpretations of familiar texts. His controversial views are sure to inspire fruitful debate.” —David Penchansky, Professor of Hebrew Bible, University of St. Thomas, USA