The Book of Contemplation: Book 39 of the Ihya' 'ulum al-din (The Fons Vitae Al-Ghazali Series #39) (Paperback) 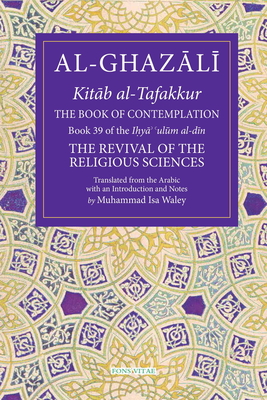 The Book of Contemplation: Book 39 of the Ihya' 'ulum al-din (The Fons Vitae Al-Ghazali Series #39) (Paperback)


We can usually get this book in 3 to 7 days, except during a pandemic. We are doing our best
The Book of Contemplation is the thirty-ninth of the forty Books of The Revival of the Religious Sciences (Ihya’ ‘ulum al-din) and the very last to appear in English translation. Abu Hamid al-Ghazali’s purpose in this Book is to explain the nature and importance of contemplation, or reflection, as an act that enriches the thinking person with increased knowledge of, and wonder at, the Creator and His creation. In Part 1, he defines and introduces the subject, explaining its importance with reference to the Qur’an, Hadiths, and sayings of wise and pious Muslims. In Part 2, he expounds his own highly original views as to the nature and fruits of contemplation. Part 3 offers detailed guidance on the most appropriate and beneficial subjects for reflection, some relating to human traits and actions and others to Divine Attributes and Actions. In Part 4, he explores in detail aspects of God’s creation, which, when viewed with an observant eye and considered with a worshipful heart, are full of wonders and offer an inexhaustible scope for reflection—from the artistry of the spider and bee to the unimaginable vastness of the heavens, which themselves are dwarfed by what lies beyond them.
Muhammad Isa Waley is a British editor, translator, and researcher specializing in the literature of Muslim spirituality in Arabic, Persian, and Turkish, and also in Islamic manuscript studies. He has an MA in Oriental Studies from the University of Cambridge and a PhD in Persian literature from the School of Oriental and African Studies, London. For 45 years he was Curator of Persian and Turkish manuscripts and books at the British Museum and later the British Library, and has worked as a consultant and/or editor for many organizations, publishers, and individuals.
"It can be said that this extraordinary book explains the mysterious tenth book of Aristotle’s famous Nicomachean Ethics, the purpose of our existence being mystical contemplation, an idea Aristotle left unexplored. The Qur’an is replete with verses asking us to reflect, contemplate, meditate, and use our intellects, reminding us that essentially our highest purpose resides in doing so. Thus, it makes perfect sense that the Prophet, God’s peace and blessings upon him, informed us that 'One hour’s meditation exceeds a year’s devotion,' (according to another recension, it exceeds devotion of sixty years). This translation adds to the remarkable work of others who have contributed to Fons Vitae’s wonderful efforts to bring the entire Ihya’ ‘ulum al-din of the great imam to modern English readers. The seasoned translator, Muhammad Isa Waley, happens to be a practitioner of the path’s practice. This book stands as a propaedeutic to the final chapter of the Ihya’, which is on death, the meditation upon which was a constant practice of our Prophet, God’s peace and blessings upon him, who said, 'Do much pondering upon the destroyer of delights: death.'” —Hamza Yusuf