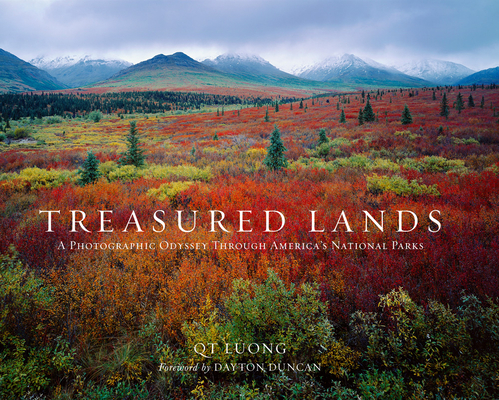 By QT Luong, Dayton Duncan (Foreword by)
$65.00
Special Order -- These books can be hard for us to get

It is said that a photograph helped launch the national parks. After Congress viewed photos of Yosemite, President Lincoln was moved to sign a bill that paved the way for the U.S. National Park Service, which was founded in 1916 and is now celebrating its centennial. In Treasured Lands: A Photographic Odyssey Through America's National Parks, photographer QT Luong pays tribute to the millions of acres of protected wilderness in our country's 59 national parks. Luong, who is featured in Ken Burns's and Dayton Duncan's documentary The National Parks: America's Best Idea, is one the most prolific photographers working in the national parks and the only one to have made large-format photographs in each of them. In an odyssey that spanned more than 20 years and 300 visits, Luong focused his lenses on iconic landscapes and rarely seen remote views, presenting his journey in this sumptuous array of more than 500 breathtaking images. Accompanying the collection of scenic masterpieces is a guide that includes maps of each park, as well as extended captions that detail where and how the photographs were made. Designed to inspire visitors to connect with the parks and invite photographers to re-create these landscapes, the guide also provides anecdotal observations that give context to the pictures and convey the sheer scope of Luong's extraordinary odyssey. Including an introduction by award-winning author and documentary filmmaker Dayton Duncan, Treasured Lands is a rich visual tour of the U.S. National Parks and an invaluable guide from a photographer who hiked - or paddled, dived, skied, snowshoed, and climbed - each park, shooting in all kinds of terrain, in all seasons, and at all times of day. QT Luong's timeless gallery of the nation's most revered landscapes beckons to nature lovers, armchair travelers, and photography enthusiasts alike, keeping America's natural wonders within reach.

Q.T. Luong is known for being the first to photograph all 59 U.S. National Parks--in large format. Ken Burns featured him in The National Parks: America's Best Idea. His photographs have been the subject of two large-format books, several magazine profiles, solo gallery and museum exhibits. Dayton Duncan was the writer and co-producer of The National Parks: America's Best Idea documentary produced by Ken Burns. He's also been involved for many years with other series directed by Burns including The Civil War, Horatio's Drive, Baseball and Jazz.