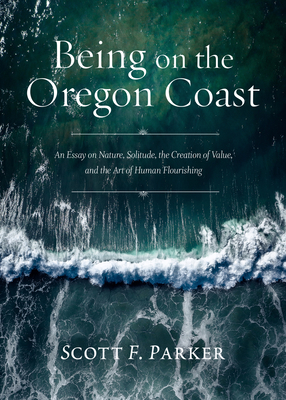 By Scott F. Parker
$15.95
On Our Shelves Now as of 24 Hours Ago
(This book cannot be returned, even for store credit.)

In 2016, months before his son was born, Scott F. Parker went to the Oregon coast to hold himself accountable for his first 35 years, to take stock of his life and what he’d learned so far, to ask what he might have to offer his son. For ten days he walked south keeping a notebook. Being on the Oregon Coast is the product of that journey. The book offers a condensed and symbolic account of Parker’s walk as his thoughts roam over such territory as nature, solitude, the creation of value, and the art of human flourishing. The prose is reflective and deeply grounded in the environment it traverses. The Pacific Ocean, the beach, and the inland woods are felt presences even in Parker’s most philosophical turns. As in his previous book, A Way Home: Oregon Essays, Parker celebrates the natural beauty of his home state. His love for Oregon is a testament to the power of place. Being on the Oregon Coast takes readers for a long walk on the beach and leaves them energized—ready for their own walks, their own thoughts, and their own possibilities. It is a profound work.

Scott F. Parker is the author of A Way Home: Oregon Essays, named by Kirkus Review as one of the top indie books of 2018, and Running after Prefontaine: A Memoir, a finalist for the Track and Field Writers of America Armory Foundation Book Award. Parker is also the editor of Conversations with Joan Didion, Conversations with Ken Kesey, Eminem and Rap, Poetry, Race, and Coffee—Philosophy for Everyone: Grounds for Debate (with Mike W. Austin). He has been published in a number of journals, magazines, and newspapers, including Tin House, Philosophy Now, Sport Literate, Rain Taxi, the Oregonian, and the Star Tribune. His work is included in anthologies such as Hood to Coast Memories, Mister Rogers and Philosophy, Alice in Wonderland and Philosophy, and What Philosophy Can Tell You about Your Lover. Parker holds writing degrees from Portland State University and the University of Minnesota. He teaches at Montana State University in Bozeman, where he lives with his wife and son.