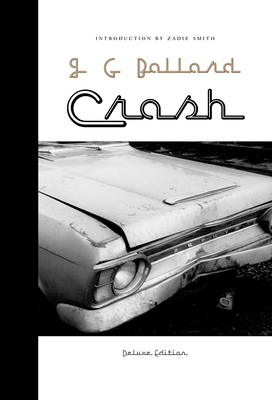 Featuring an introduction by Zadie Smith; Jim's Desk and introductory notes by Chris Beckett
The short stories Crash, Tolerances of the Human Face, and Mae West's Reduction Mammoplasty by J. G. Ballard
Treatments and letters about the BBC2 Review short film about J. G. Ballard titled Crash that aired in February 1971
Introduction to the French edition of Crash
An excerpt of an interview with Will Self and J. G. Ballard from 1994 When J. G. Ballard, our narrator, smashes his car into another and watches a man die in front of him, he finds himself drawn with increasing intensity to the mangled impacts of car crashes. Robert Vaughan, a former TV scientist turned nightmare angel of the expressway, has gathered around him a collection of alienated crash victims and experiments with a series of autoerotic atrocities, each more sinister than the last. But Vaughan craves the ultimate crash―a head-on collision of blood, semen, engine coolant, and iconic celebrity. First published in 1973, Crash remains one of the most shocking novels of the twentieth century and was made into an equally controversial film by David Cronenberg.

J. G. Ballard was born in 1930 in Shanghai. After internment in a civilian prison camp, his family returned to England in 1946. His 1984 bestseller Empire of the Sun won the Guardian Fiction Prize and the James Tait Black Memorial Prize. His controversial novel Crash was made into a film by David Cronenberg. His autobiography Miracles of Life was published in 2008, and a collection of interviews with the author, Extreme Metaphors, was published in 2012. J. G. Ballard passed away in 2009. Zadie Smith is the author of the novels White Teeth, The Autograph Man, On Beauty, NW, and Swing Time, as well as a collection of essays, Changing My Mind.