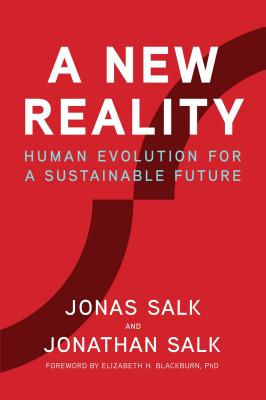 By Dr. Jonas Salk, Jonathan Salk, David Dewane (With), PhD Blackburn, Elizabeth H. (Foreword by)
$26.00
We can usually get this book in 3 to 5 days, except during a pandemic. We are doing our best

Drawn from the writings of visionary scientist Jonas Salk, who developed the polio vaccine, and extended and developed by his son Jonathan, the message of A New Reality explodes from the past, and sheds light on tensions that besiege us, and the currents of discord that are raging as these words are written. More importantly, it indicates a way forward out of our current situation.

Written by a world-famous doctor and folk hero, based on population data, rich in visual imagery, elegantly designed, and clearly written,  A New Reality is unique in the marketplace. Readable in one or two sittings, it is accessible to the general reader while at the same time being of essential value to policy makers and academics. Its brevity and simplicity of design belie the importance and sophistication of its message.

“We are at a point in the course of human social evolution when the demands of survival converge with the higher ideals of humankind and the well-being and flourishing of human society. It is up to us to see that we navigate this transition, adapting to and emerging in a new reality.” —A New Reality

Our country is divided and polarized. Terrorism is a major threat throughout much of the world. Mass migrations are causing national and international tension. Population growth continues to increase, especially in the developing regions of the world. Controversy rages as to the use of fossil fuels versus the development of alternative forms of energy. Disagreement continues about climate change. Opposing currents of opinion collide as to how much we should help other areas in the world and how much to help ourselves. Basic values are in conflict.

More than 40 years ago, Jonas Salk understood that we are at a unique moment in the history of the human species. After centuries of increase, population growth has begun to slow and is trending toward equilibrium. This change is accompanied by an equally significant change in human values—a shift from those based on unlimited availability of resources, unremitting growth, excess, independence, competition and short-term thinking to those based on limits, equilibrium, balance, interdependence, cooperation and long-term thinking. This momentous transition is the source of far-reaching tension and conflict.

The way through this difficult era is to understand its basis and to focus on new values that will be of the greatest benefit to humankind. There is an urgency, however, and failure to adapt will result in disaster both for humanity and for the planet as a whole.

A New Reality delivers a message of both caution and hope. Readers across the social and political spectrum will find it a reasoned and balanced counterpoint to current social and political trends. Its elegant design and long-range perspective will appeal to general readers, policy makers, millennials, baby boomers, teachers, and students, filling a need in the marketplace for a work of positivity and wisdom in otherwise bleak times.

Jonas Salk is one of the most famous and revered figures of the twentieth century. He was the developer of the first effective vaccine to prevent polio. Almost overnight, he became internationally famous—a hero to an appreciative public. His legacy survives to this day, and his name and image are instantly recognizable to many. In the last decades of his life, Salk devoted considerable attention to the development of an evolutionary philosophy that would be the basis for solving some of the most basic problems of humankind. He was the author of four books, including World Population and Human Values: A New Reality, written in 1981 with his son Jonathan. A New Reality is an update, revision and redesign of that title.

Nobel prize winning molecular biologist Elizabeth Blackburn was born in Hobart on the island of Tasmania, Australia. Both of her parents were doctors. She took an early interest in animals and nature and went on to study biochemistry at the university in Melbourne. She later received her PhD from Cambridge University, England, where she also met her future husband. The couple eventually moved to Yale University in New Haven, USA, and later to the University of California in San Francisco. They have one son. Elizabeth Blackburn has taken an interest in the ethical implications of research and has contributed to the creation of a code regulating the field. Dr. Blackburn was president of the Salk Institute for Biological Studies in San Diego, California 2016-2018. In addition to the Nobel Prize, Blackburn has received nearly every major award in science, including the Lasker, Gruber and Gairdner prizes. She was named to the TIME 100 in 2007, the magazine’s yearly list of the most influential people in the world. She is a member of numerous prestigious scientific societies, including the National Academy of Sciences, the National Academy of Medicine and the Royal Society of London. Blackburn has shown an abiding commitment to public service in the scientific, academic and public policy arenas. She has served as president of both the American Association of Cancer Research and the American Society for Cell Biology, and has served on the editorial boards of several scientific journals, including the influential journals Cell and Science. Helping to guide public science policy, she was a member of the Stem Cell Research Advisory Panel for the California State Legislature and a member of the President's Council of Bioethics, an advisory committee to the President of the United States. The Nobel Prize in Physiology or Medicine 2009 was awarded jointly to Elizabeth H. Blackburn, Carol W. Greider and Jack W. Szostak "for the discovery of how chromosomes are protected by telomeres and the enzyme telomerase".

A New Reality is a compelling message of hope, bringing Jonas Salk’s vision of "the evolution of the wisest" to life. This is an essential book for anyone who cares about our health, our present, and our future.
— Arianna Huffington

This book provides an urgently needed perspective on what we need to do collectively to transform our conversations and open our awareness to a new way of collaborating in order to to cultivate the kind of connections and change we need in our world today.
— Dan Siegel, MD

This book is a brilliant, redesigned, reformulated effort by Jonathan Salk and David Dewane of Jonas' vision of patterns in Nature and their application to humanity's future. It validates his concept of Epoch B and his creation of the Epoch B Foundation of which I was a member in the 1970s and 80s.
— Richard Saul Wurman

A New Reality is actually a timeless one - - our fragile planet can only sustain life of the species that understand its limits. The Salks have given us a sober reminder of that fact, but also a hopeful roadmap to a more sustainable future. I hope everyone pays close attention.
— Terry Tamminen

Humanity is at a critical point in history. A New Reality confirms this in a powerful way. Enlisting the principles that Jonas and Jonathan Salk describe will lead to a positive, restorative future -- a future where 10 billion humans can live within the Earth's planetary limits in peace and harmony. A New Reality is a must-read for anyone who cares about our future.
— Colonel Ron Garan

With A New Reality: Human Evolution for A Sustainable Future Jonathan Salk, son of the legendary scientist Jonas Salk, has given us a truly beautiful book. It’s beautiful visually and it’s beautiful in its simplicity, with the human condition elegantly captured by a single mathematical curve. But most of all it’s beautiful for its underlying message—that if we can find a way to work through the great challenges we face today as a civilization, a sustainable and harmonious future remains within our reach.
— Michael Mann

This is a book of great vision and optimism.  While the Salks raise our awareness of the global challenges we face in this century, they also provide us a direction to reach a future of planetary health.  This small yet powerful book shows us that we have the capacity to shape a balanced future that has never been realized before.  There is urgency, but together we can achieve "A New Reality.
— Philip Enquist

The Salks have provided an intriguing and accessible description of how the world is changing. In this creative overview of the past and the future, the Salks point out that a world that provides the best for all is the key for our future - not because it is a moral or ethical thing to do, but because it is pragmatic and benefits everyone in the end.  Leaders in all fields will benefit from this book.  Win-win solutions are possible.
— William Foege

In a world mired in shortsighted solutions, A New Reality takes a global view of our future with an inspiring mix of rationality and compassion. Jonas and Jonathan Salk do a masterful job of interweaving history and science with a deep respect for leveraging human solutions for human problems. They call for no less than a transformation of human consciousness as our survival comes to depend upon compromise, collaboration, and interconnectedness – a global tribe on a small planet. Insightful, powerful, and fascinating.
— Lou Cozolino