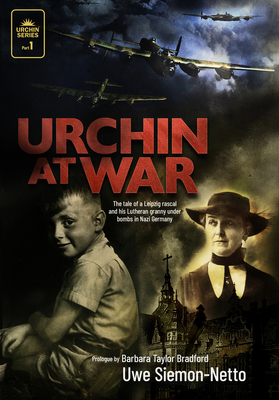 What was it like to grow up as an urban urchin under bombs in Nazi Germany? Did he have a real childhood? Did he play pranks on grownups, as young rascals do in normal times? Could he be shielded against Nationalist ideology? In Urchin at War, Uwe Siemon-Netto answers these questions in the affirmative with humour and drama.

The son of a lawyer blinded in World War I, he describes the parallel universe in which his bourgeois family lived in Leipzig. He vividly writes about the night when his home was bombed out. He had to guide his father over puddles of green flames caused by phosphor to his grandmother's apartment where he discovered hours later that - of all people - Frenchmen had rescued his mother from the flames. He tells the story of how he stole a tram after an air raid, and how his family buried his grand-aunt's right hand because that was the only body part rescuers found under the rubble after her house was hit by a blockbuster bomb.

Dr. Siemon-Netto, a journalist and academic, relates how in a country parsonage he was evacuated to, the pro-Nazi pastor beat him up for using French loan words and how he preached on Sundays that Hitler was Germany's saviour, prompting the courageous organist to whisper into the author's ears: "He's lying He is betraying our Lord "

When the Americans occupied Leipzig on Hitler's birthday in 1945, the author's family feasted on half an egg in mustard sauce each.

Urchin at War is an Ode to Omi, his funny and intrepid grandmother Clara Netto, a grande dame who in the air raid shelter taught him basic Lutheran doctrine so well that it led him to interrupt his stellar career as a reporter at age 50 to study theology in Chicago and earn a doctorate in Boston.

Urchin at War is the first volume in the 1517 Publishing's Urchin Series about the extraordinary life story of a kid and high school dropout who became a sought-after newsman, who covered the Kennedy assassination and the Vietnam War, and ended up being a Lutheran lay theologian.