Fantastic Creatures of the Mountains and Seas: A Chinese Classic (Hardcover) 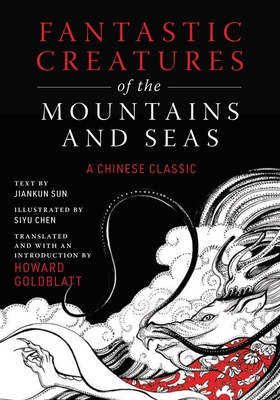 Fantastic Creatures of the Mountains and Seas: A Chinese Classic (Hardcover)


We can usually get this book in 3 to 7 days, except during a pandemic. We are doing our best
The gorgeously illustrated contemporary edition of an ancient Chinese text—for fans of fantastic beasts everywhere

Fantastic Creatures of the Mountains and Seas is a new translation for contemporary readers of a classic Chinese text that is at once the geography of an ancient world, a bestiary of mythical creatures, and a book of cultural and medicinal lore. Illustrated throughout with more than 180 two-color drawings that are so sinuous they move on the page, it is a work for lovers of fantasy and mythology, ancient knowledge, fabulous beasts, and inspired art.

The beings catalogued within these pages come from the regions of the known world, from the mountains and seas, the Great Wastelands, and the Lands Within the Seas that became China. They include spirits and deities and all sorts of strange creatures—dragons and phoenixes, hybrid beasts, some with human features, some hideous or with a call like wood splitting, or that portend drought or flood or bounty; others whose flesh cures disease or fends off nightmares, or whose pelt guarantees many progeny.

Drawn from The Classic of Mountains and Seas, Fantastic Creatures is the work of two members of China's millennial generation, a young scholar and writer once known as the youngest "Genius of Chinese Cultural Studies" and an inspired illustrator trained in China and the United States, who together managed to communicate with the soul of a 4,000-year-old beast and have brought forth its strange beauty. Their work has been rendered into English by the foremost translator of modern Chinese literature in the West.
Howard Goldblatt is a literary translator of numerous works of contemporary Chinese fiction from mainland China and Taiwan, including Nobel Prize–winner Mo Yan, five of whose works are published by Arcade (The Garlic Ballads; The Republic of Wine; Big Breasts and Wide Hips; Life and Death Are Wearing Me Out; Shifu, You'll Do Anything for a Laugh). He has also translated works by Liu Zhenyun (I Did Not Kill My Husband; The Cook, the Crook, and the Real Estate Tycoon; Remembering 1942, which are published by Arcade), Huang Chunming (The Taste of Apples), and Chen Ruoxi (The Execution of Mayor Yin). He taught modern Chinese literature and culture for more than a quarter of a century. He lives in Lafayette, Colorado.

Siyu Chen, whose inspired illustrations provided the spark for this new edition, is a freelance illustrator. She graduated from Tsinghua University in Beijing with bachelor's and master’s degrees, then studied illustration at the School of Visual Arts in New York City, where she received her second master’s degree. Her published books include, besides Fantastic Creatures of the Mountains and Seas (Shanhaijing), Songs of the South (Chu Ci). Her illustration work has been selected for the American Illustration Archive. She lives in Germany with her husband and two children.

Jiankun Sun, once known as the youngest "Genius of Chinese Cultural Studies," is now a graduate student of the Institute of History, Shanghai Academy of Social Sciences. He excels in research on The Classic of Mountains and Seas (Shanhaijing) and was a first-prize winner of Fudan University's Boya Cup national essay competition for his essay on The Classic of Mountains and Seas. He lives in Shanghai.
“An essential read for anyone interested in fantastical creatures, perfect for fans of Borges’ Book of Imaginary Beings and countless role-playing game bestiaries alike.”—Booklist, starred review

"For Americans like me, who learned to read from comic books, this book is a window to an entirely new world using the magic of comic book illustrations, which is universally understood. What a special treat to enter this kingdom of ancient Asian wisdom."—Francis Ford Coppola

“Fantastic Creatures of the Mountains and Seas is remarkable for its beauty, ancient perspective, attention to such key issues as the environment, and contemporary vision. The images are inventive, the text exciting, and the design magnificent. It is a masterpiece and a feat.”—Fiona Donovan