All In: For Those in Search of Something More (Paperback) 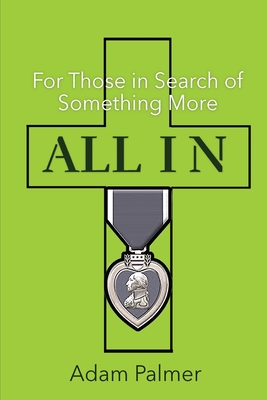 All In: For Those in Search of Something More (Paperback)

US Army Veteran Adam Palmer's memoir offers a gut-wrenching expose' of his desert conversion and his mission to share the Gospel in 48 days, in 48 states to reach 1 million people. On his journey, Palmer encounters people like The Dude, whose conversion helps bring Palmer's mission to life and inspires him to do more. ALL IN details Palmer's discoveries around life in this world and the next, all while laying bare his human failures and insecurities offered up to the mercy and compassion of God. For combat veterans and everyday readers alike, ALL IN was written to help others find their identity and purpose in serving Christ and others.

Adam Palmer is a husband, father, and U.S. Army veteran who served three deployments in Iraq and received the Purple Heart for wounds received in combat. His greatest passion is serving Jesus by impacting as many people as possible through God's love. Originally the product of a small town nestled in the foothills of the Blue Ridge Mountains of North Carolina, he and his family now reside in northern Illinois, where he pursues his passion for seeing lives changed by training and mentoring young people. By volunteering his time, experience, and resources, Adam is humbled and honored to prepare youth for military careers and help them discover their path to a successful and abundant life in Christ. He believes that life is an adventure, and Jesus is the best tour guide. Above all, Adam longs to one day hear, Well done, good and faithful servant.

"Christian readers who thrill at the desert conversion of the Ethiopian eunuch will be inspired by this story of the desert conversion of Adam Palmer. He and his associates, Shizzle, Hud, K-Dawg, and Big Baby engage in a modern tale of discovery regarding the truth about mortality in this life and the one that follows. ALL IN is gritty. But, it is gritty in its heartfelt transparency of a wounded soul admitting his human failures and insecurities while affirming the grace and mercy which is offered by a compassionate God. This intense account is not a sterile treatise on post-traumatic stress or moral injury, both of which are described in heart-breaking tones. It is instead a gut-wrenching expose' of one man's soul, spirit, and sin. But, it is also a story of hope and triumph found in redemption. ALL IN is ultimately an incredible confession of healing found in the second chance of life offered by Jesus Christ. A must read for saints, seekers, and skeptics alike." - CAPTAIN James R. Fisher, CHC, USN (Ret.)

"Much is said about heroes in our times. No one will doubt that Adam Palmer is among the greats. He served three terms in Iraq. He looked death in the face, then looked to God who could save him. His body bears the scars of heroism. After his release he did a tour of another kind for his country, traveling the nation to help and serve people in the inner cities. He has settled into our area with his family. His heroism continues as he works with broken young people coming out of the Juvenile Justice System. He is on mission to bring help and hope to the brokenness of those around him. Read this story. Arise to serve. Compelling " - Dr. Bob Griffin, Renewal Ministries