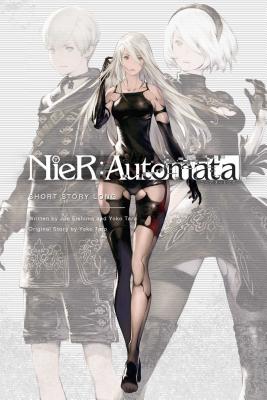 
We can usually get this book in 3 to 7 days, except during a pandemic. We are doing our best
Experience the world and characters of the hit video game franchise!

When alien forces invade with an army of Machines, the remnants of humanity must depend on Androids of their own design—the placid 2B and the excitable 9S—to survive.

Question: What is a novel?

Affirmative: It is hypothesized that this book is “interesting.”

Hypothesis: “Interest” is an internal incentive that allows humans to practice tolerance.

Yoko Taro, video game director and scenario writer, was born on June 6, 1970 in Nagoya, Japan. Often seen in public wearing a mask of No. 7 from NieR, Yoko is renowned for his unconventional approach to game design and the dark themes he employs in his stories. He is best known for directing and writing the NieR and Drakengard series of games, both available from Square Enix.