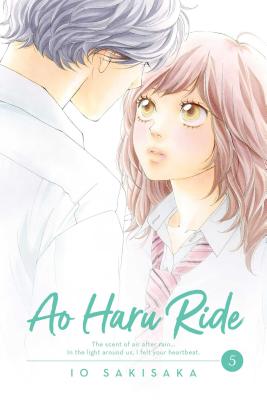 This is book number 5 in the Ao Haru Ride series.

The popular shojo manga series that was adapted into the Blue Spring Ride anime!

Futaba Yoshioka thought all boys were loud and obnoxious until she met Kou Tanaka in junior high. But as soon as she realized she really liked him, he had already moved away because of family issues. Now, in high school, Kou has reappeared, but is he still the same boy she fell in love with?

Futaba Yoshioka has encountered her first love again in high school, but he seems different from the boy she once knew. Kou asks Futaba to go on a date with him to the summer festival. But as the two grow closer, fellow student Toma Kikuchi sets his sights on Futaba.
Born on June 8, Io Sakisaka made her debut as a manga creator with Sakura, Chiru. Her works include Call My Name, Gate of Planet and Blue. Strobe Edge, her previous work, is also published by VIZ Media’s Shojo Beat imprint. Ao Haru Ride was adapted into an anime series in 2014. In her spare time, Sakisaka likes to paint things and sleep.