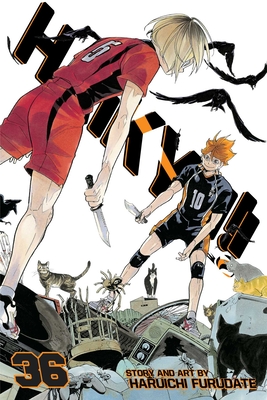 This is book number 36 in the Haikyu!! series.

Kenma Kozume has tried to keep Kageyama and Hinata contained in a birdcage, but they finally break free with a bold four set! Now that Hinata has added height to his arsenal, Nekoma brings out their own rookie tandem of giants—Lev Haiba and Sou Inuoka—to stop him! The Dumpster Battle dives into the final, climactic set… Who will come out on top, Hinata or Kozume?!
Haruichi Furudate began his manga career when he was 25 years old with the one-shot Ousama Kid (King Kid), which won an honorable mention for the 14th Jump Treasure Newcomer Manga Prize. His first series, Kiben Gakuha, Yotsuya Sensei no Kaidan (Philosophy School, Yotsuya Sensei’s Ghost Stories), was serialized in Weekly Shonen Jump in 2010. In 2012, he began serializing Haikyu!! in Weekly Shonen Jump, where it became his most popular work to date.