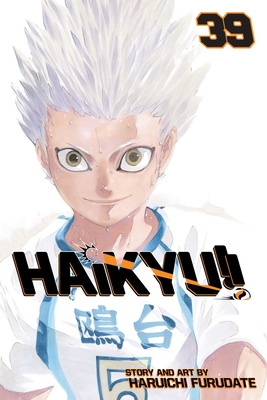 This is book number 39 in the Haikyu!! series.

It’s the Spring Tournament quarterfinals, and the two smallest hitters—Hinata and Hoshiumi—are already making the sparks fly! Kamomedai’s consistent and systematic blocking strategies have Hinata stymied, while Tsukishima’s cold and logical decision-making has Hoshiumi stuffed! It isn’t long before the game turns into a vicious back-and-forth battle between offense and defense!
Haruichi Furudate began his manga career when he was 25 years old with the one-shot Ousama Kid (King Kid), which won an honorable mention for the 14th Jump Treasure Newcomer Manga Prize. His first series, Kiben Gakuha, Yotsuya Sensei no Kaidan (Philosophy School, Yotsuya Sensei’s Ghost Stories), was serialized in Weekly Shonen Jump in 2010. In 2012, he began serializing Haikyu!! in Weekly Shonen Jump, where it became his most popular work to date.