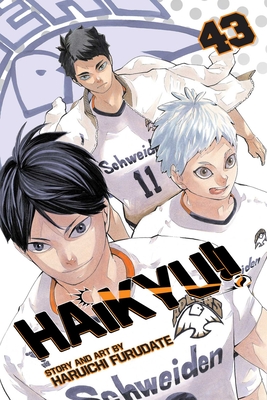 This is book number 43 in the Haikyu!! series.

After graduating high school, Hinata books it all the way to Brazil to learn how to play beach volleyball and improve his control and strength. While there, his efforts earn him the moniker “Ninja Shoyo,” and one day he’s approached by another player named Heitor, who is desperate to win his next match and keep his sponsors. Will Hinata’s skills be enough to help his new partner?
Haruichi Furudate began his manga career when he was 25 years old with the one-shot Ousama Kid (King Kid), which won an honorable mention for the 14th Jump Treasure Newcomer Manga Prize. His first series, Kiben Gakuha, Yotsuya Sensei no Kaidan (Philosophy School, Yotsuya Sensei’s Ghost Stories), was serialized in Weekly Shonen Jump in 2010. In 2012, he began serializing Haikyu!! in Weekly Shonen Jump, where it became his most popular work to date.