Beneath the Attic (Dollanganger #9) (Paperback) 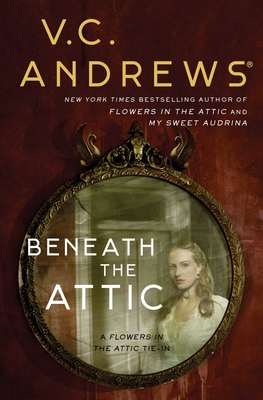 Beneath the Attic (Dollanganger #9) (Paperback)

This is book number 9 in the Dollanganger series.

Forbidden passions have shaped and haunted the Dollanganger family since their first novel—Flowers in the Attic—debuted forty years ago. Now discover how twisted the family roots truly are, and witness the clan’s origins as a result of one wild and complicated relationship. In this evocative and thrilling tale from New York Times bestselling author V.C. Andrews, see Corrine Dixon as a young girl and discover the fascinating family history of the Dollanganger clan.

Two generations before Corinne Foxworth locked her children in an attic, her grandmother, a gorgeous young girl named Corrine Dixon, is swept away by the charms of rich, sophisticated, and handsome Garland Foxworth. After discovering that she’s pregnant, Garland does what appears to be the honorable thing and marries her in a huge ceremony on the luxurious Foxworth Hall grounds. Both families fervently overlook the pregnancy, happy for a suitable resolution.

Now the mistress of a labyrinthine estate, Corrine discovers that nothing is what is seems. Garland is not the man once captivated by her charms, and she’s increasingly troubled by his infatuation with memories of his departed mother.

Can Corrine survive this strange new life? Or is her fate already sealed?

Explore the origins of the legendary Dollanganger family in this page-turning, gripping gothic thriller.
One of the most popular authors of all time, V.C. Andrews has been a bestselling phenomenon since the publication of Flowers in the Attic, first in the renowned Dollanganger family series, which includes Petals on the Wind, If There Be Thorns, Seeds of Yesterday, and Garden of Shadows. The family saga continues with Christopher’s Diary: Secrets of Foxworth, Christopher’s Diary: Echoes of Dollanganger, and Secret Brother, as well as Beneath the Attic, Out of the Attic, and Shadows of Foxworth as part of the fortieth anniversary celebration. There are more than ninety V.C. Andrews novels, which have sold over 107 million copies worldwide and have been translated into twenty-five foreign languages. Andrews’s life story is told in The Woman Beyond the Attic. Join the conversation about the world of V.C. Andrews at Facebook.com/OfficialVCAndrews.
“I will probably be clutching Flowers in the Attic in my gnarled hands on my deathbed.”
—Gillian Flynn, #1 New York Times bestselling author of Gone Girl