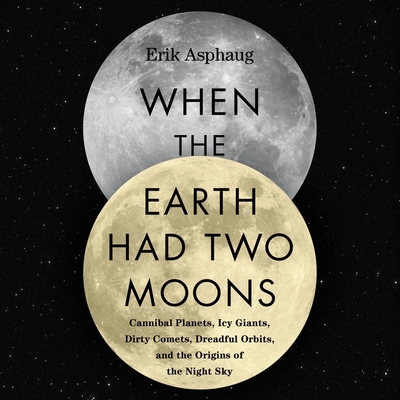 By Erik Asphaug, Adam Verner (Read by)
$39.99
We can usually get this book in 3 to 5 days, except during a pandemic. We are doing our best

An astonishing exploration of planet formation and the origins of life by one of the world's most innovative planetary geologists.In 1959, the Soviet probe Luna 3 took the first photos of the far side of the moon. Even in their poor resolution, the images stunned scientists: the far side is an enormous mountainous expanse, not the vast lava-plains seen from Earth. Subsequent missions have confirmed this in much greater detail.

In When the Earth Had Two Moons, esteemed planetary geologist Erik Asphaug takes us on an exhilarating tour through the farthest reaches of time and our galaxy to find out why. Beautifully written and provocatively argued, When the Earth Had Two Moons is not only a mind-blowing astronomical tour but a profound inquiry into the nature of life here--and billions of miles from home.