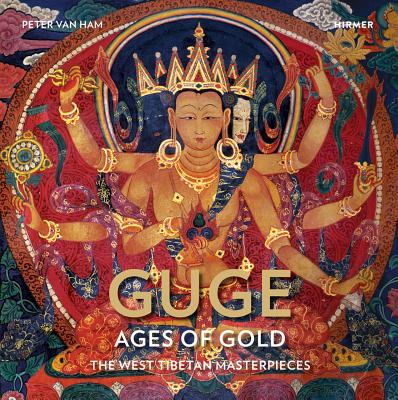 
Backordered. There will likely be a delay in getting this book
Guge was a great Buddhist kingdom in Western Tibet. Today, only ruins remain of the once-splendid civilization, but, over seven hundred years, its rulers were passionate patrons of the arts who commissioned vast temple complexes, richly ornamented and filled with art and furniture by Kashmiri master craftsmen. The grand, spacious temples of Guge are all the more captivating because of the kingdom’s sudden, mysterious disappearance.

To create Guge—Ages of Gold, photographer Peter van Ham and collaborators gained access to Guge’s temple complexes and monasteries—many of which are no longer accessible to photographers—and shows for the first time the art and artifacts that have survived to the present day, from both the Indian and the Tibetan sides of Guge and spanning the entire time period. Among the sitesdocumented are the monasteries Tholing, Tsaparang, and Dungkar, in addition to Serkhang, the “Golden Temple,” which contains many beautiful murals completed in the sixteenth century during the second of Guge’s two golden ages, when the formal and stylistic direction of Guge’s art became characterized by a blend of Kashmiri traditions and Nepalese and Chinese influences. A concise text accompanies the images, bringing in the latest research on Guge and the art and culture of western Tibet.

Guge is a wonder of the world, yet few photographers have had the opportunity to capture it—and even fewer with such vision and technical skill. Guge—Ages of Gold seeks to preserve this rich artistic and cultural heritage.

Peter van Ham is a Frankfurt-based author and photographer who has been researching Himalayan culture for nearly thirty years, documenting it in a dozen books to date.