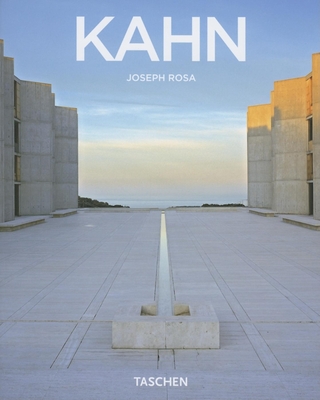 
This book has been declared out of stock indefinitely, so we are unlikely to be able to get it.
Brilliant buildings
Louis Isadore Kahn and a luminous modernist language

Louis Isadore Kahn (1901 1974) treated each building like a temple. Across the United States, in India, Bangladesh, Pakistan, and Israel, his designs combined the sleek, utilitarian surfaces of modernism with a devotion to geometric forms and a reverence for natural light that suffused his structures with a monumental and breathtaking spirituality.

Kahn was born in Estonia in 1901 but emigrated with his family to Philadelphia, Pennsylvania, in 1906. He graduated from the University of Pennsylvania School of Fine Arts in 1924 and worked in different architecture offices before setting up his own atelier in 1934. Kahn devoted much time to the study of contemporary architecture and housing, blossoming with his own unique style in the last two decades of his life. His language combined the vocabulary of the International Style with a back to basics grammar inspired by his visits to ancient sites in Italy, Greece, and Egypt.

Above all, Kahn believed ardently in the interplay of light between mass and void. His masterworks, such as the National Assembly Building in Dhaka, Bangladesh, or Kimbell Art Museum in Forth Worth, Texas, exude their weight, their materials, and construction, but are pierced with such spotlights of sunshine, bathed in such natural light luminescence, as to acquire something celestial within their mass.

This essential introduction brings together 17 of Kahn's most important buildings across his cultural, governmental, religious, and residential repertoire. Plans, views, descriptions, and quality photographs trace the context and development of each project, while an introductory essay explores Kahn's unique architectural ideology and his legacy as one of the most important 20th-century American architects since Frank Lloyd Wright.