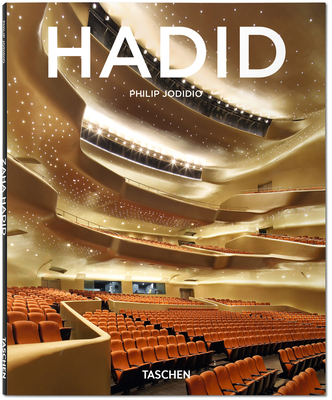 
This book has been declared out of stock indefinitely, so we are unlikely to be able to get it.
Audacious futurism: The forward-thinking work of a singular architect Zaha Hadid is a wildly controversial architect, who for many years built almost nothing, despite her designs winning prizes and critical acclaim. Some even said her work was unbuildable. Yet over the past decade she has completed numerous structures including the Rosenthal Center for Contemporary Art in Cincinnati (which the New York Times called ''the most important new building in America since the Cold War''), the MAXXI Museum in Rome, the Guangzhou Opera House, her first completed project in China, and the London Aquatics Center for the 2012 Olympics. Today, Hadid is firmly established among the lite of world architecture, her audacious and futuristic designs as well as her sense for style and fashion having catapulted her to international fame. About the Series:
Each book in TASCHEN's Basic Architecture Series features:
Philip Jodidio studied art history and economics at Harvard, and edited "Connaissance des Arts" for over 20 years. His books include TASCHEN's "Architecture Now!" series, and monographs on Tadao Ando, Norman Foster, Richard Meier, Jean Nouvel, and Zaha Hadid. He is internationally renowned as one of the most popular writers on the subject of architecture.