Thirteen Days A Memoir of the Cuban Missile Crisis (Paperback) 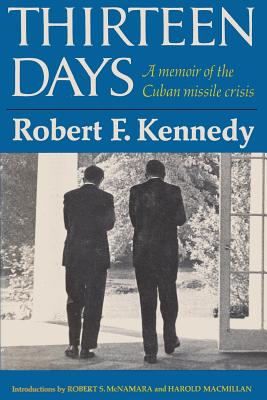 Thirteen Days A Memoir of the Cuban Missile Crisis (Paperback)

"On Tuesday morning, October 16, 1962, shortly after nine o'clock President Kennedy called and asked me to come to the White House. He said that we were facing great trouble. Shortly afterward, in his office, he told me that a U-2 had just finished a photographic mission and that the Intelligence Community had become convinced that Russia was placing missiles and atomic weapons in Cuba.

"That was the beginning of the Cuban Missile crisis - a confrontation between the two giant atomic nations, the U. S. and the U. S. S. R. which brought the world to the abyss of nuclear destruction and the end of mankind."

Thus the late Senator Robert F. Kennedy began his account, in this intensely moving and dramatic document of the agonizing events of those thirteen days when America confronted Russian in the Caribbean - the Russians raced to establish an atomic capability that would threaten the entire American continent and America mobilized her military and diplomatic forces in a supreme effort to prevent the establishment of intercontinental missiles in Cuba.

All now know the outcome of that fateful encounter. But very few people shared the behind-the-scenes story as it has been preserved in this book by the late Senator Robert F. Kennedy. In a clear and simple record he describes the personalities involved in the crisis calling particular attention to the actions and attitudes of his brother, President John F. Kennedy. He describes the President's advisors in their working sessions and daily, even hourly exchanges between Russian representatives and American. Moreover, he explores the frightening responsibility of two great nations holding the fate of the world in their hands and the morel burden they must bear.

Frustration, anger, tension, dignity and wisdom were all at work as the Cuban missile crisis reached its peak. Robert F. Kennedy has conveyed all of that feeling in his remarkable narrative.

This book includes reproductions of contemporary documents: certain of President Kennedy's exchanges with Nikita Khrushchev, his speeches and public declarations.

Thirteen Days is an extraordinary historical document and an extraordinary human document as well. It is remarkable not only for its inside story of the first great crisis of the atomic era but also for its moving revelation of the relationship of two men.