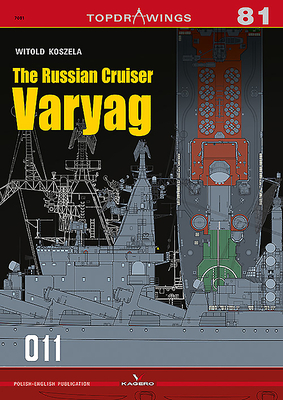 This is book number 7081 in the Topdrawings series.

The Russian cruiser Varyag is one of the most exciting and remarkable battleships concerning construction and armament, serving the USSR Navy during the Cold War.

The ship was built in 1979-1989 as one of the four large missile cruisers of the project 1164. NATO designated Varyag as Slava. The battleship has unique shape dominated by the complex of superstructures with electrical equipment system antennas on top as well as SM-248 launchers of the 4K80 Bazalt system along the sides.

The missile cruisers of the project 1164 to which, apart from Varyag, also belong Moscow (ex-Slava), Marshal Ustinov (ex-Admiral Lobov), and Ukraine (ex-Komsomolets/Admiral Flota Lobov) were one of the best in their class at the time with massive firepower. Because of technologically advanced missiles, they were called "aircraft carrier killers," which was related to their primary purpose - destroying American aircraft carriers.