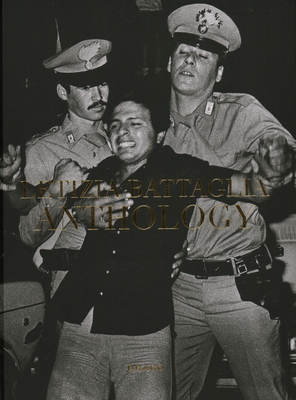 By Letizia Battaglia
$90.00
We can usually get this book in 3 to 5 days, except during a pandemic. We are doing our best

This is an Anthology that is all about getting close enough. As the quotation at the start of the book says, "If your pictures aren't good enough, you're not close enough. Like the people you are shooting, and let me know it." This is the opening line of Anthology, a book published by Drago and curated by Paolo Falcone. And this is a book that allows you to get close enough. A rich tapestry of one of the most significant photographers of the twentieth century and it is the multidisciplinary nature of Battaglia, as a photographer, that has created an immeasurable body of work. The Anthology functions as a documentation of Sicily's "Lead Years", the "Anni di Piombo", and it is this criminality that Battaglia has always refused to dress up in any other colour than black and white. For the Anthology is a collection of photography, entirely in monochrome. And this is the means through which Battaglia manages to pick both life and death out of her city. By reducing the noise of her city, the images in Anthology are brought to life. They are revved up. It's a culture of decadence and it's a culture of death. From the very first pages of the book it becomes clear that Anthology is a mixture of blood, sweat and tears . The book does not start with blood, but with images of love and labour: a line of workers stand, raising sickles above their heads, a marriage seems furtive and hurried as a bride gets into a car, a couple kiss on a beach. And then comes the blood. And this is blood, which in real time, is mingled with the smell of brioches from the Patisserie, the smell of hot sun on the tarmac, the sound of the honking cars. And yet in Anthology, Battaglia reduces this cacophony to the fact that making a photograph a shot of time outside of all other surrounding stimuli, means you capture the world. You capture the anthological feel of a moment that would otherwise be tarnished by too much noise. And it is by stripping down every image to the bare minimum that Battaglia ensures that death is not tarnished by life. And equally that life is not tarnished by other forms of life and by other moments in such a chaotic city. Especially in a city like Palermo, where the shootings were never a single event, but a myriad round of gunfire shots, cheap shots of the midnight grappa. And it is this fact that Anthology shows perfectly. Anthology tells a story in black and white. No addition of colour could have made these moments of death, which took place in Battaglia's city, quite so anthological. Nor would it make it quite so much about the citizens and the lives playing themselves out in Palermo. If Battaglia is a war journalist, then she is also a birth journalist and a capturer of all the stages of life that take place in between. In one of the penultimate images of the collection, a woman is giving birth. The ultimate and final image, a piece of graffiti, is something of a request. Prego graffitied a wall of a street in Palermo five times. A prayer, a thanks, a demand for forgiveness. The Anthology is a story of labour. The labour it takes to love a city. The labour it takes to fight brutality; the labour it takes to leave. It is a collection curated by Paolo Falcone and covers Letizia Battaglia's photographic work from 1971-2016. There is a dedication by Paolo Falcone at the end of the book. The book offers something profound, not only for those with an interest in Sicilian history, the brutality of the Corleone mafia clan or the Lead Years, it exposes the wave of violence that plagued not just the city of Palermo, but two decades of fighting between the political left and right extremes in Italy. It is also an Anthology of profound human experience, joy and suffering. And important to all.