Rajput Arms and Armour: The Rathores and Their Armoury at Jodhpur Fort (Hardcover) 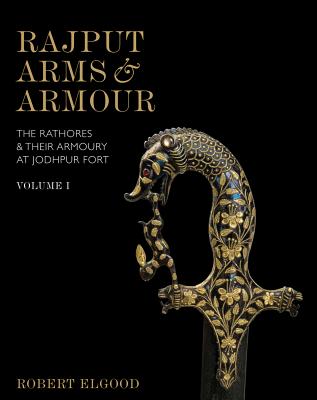 Rajput Arms and Armour: The Rathores and Their Armoury at Jodhpur Fort (Hardcover)


This book has been declared out of stock indefinitely, so we are unlikely to be able to get it.
-The book's foreword has been written by the 37th Custodian of Marwar-Jodhpur, His Highness Maharaja Gaj Singhji Sahib Bahadur II of Jodhpur-Marwar -Though the Rajputs are the premier warrior society in India, these books are the first of their kind to focus on their arms and armor - The volumes not only advance knowledge of the subject, but also reflect on the significance of the Rathores in history, and their 556-year-old fort Some years ago the study of arms and armor of the subcontinent reached a plateau where enough was known to allow curators and collectors a veneer of authority when writing and speaking about the topic. This book shows how very thin that veneer was. For political and more recently commercial reasons the cultural history of the subcontinent has been largely expressed through the Mughal experience of India. Whilst it is true that the Muslim Mughals dominated India the empire they ruled was predominantly Hindu. This book reclaims the Hindu contribution to the military culture of the Mughal period. The Rajputs were very closely aligned to the Mughals from the reign of Akbar in the sixteenth century but they retained their own distinctive values. The armory at Mehrangarh helps us to enter an unfamiliar world. A tradition of courage and self-sacrifice was conserved in music and poetry, an ideology so extreme that scholars have struggled to concede its existence. This radical book challenges arms and armor orthodoxy and is essential reading for scholars, collectors and dealers interested in India and its wider culture.
Robert Elgood is a much-published expert in the field of arms and armor. He has a BA in Islamic History from the School of Oriental and African Studies (SOAS), London University; and a D. Phil. from Oxford University in Indian Anthropology. He was consultant in Indian and Islamic arms at Sotheby's London in the 1980s and Research Fellow, Eastern European, Islamic and Asian Arms and Armour at the Wallace Collection 2006 - 2012. Fellow of the Society of Antiquaries and a Fellow of the Royal Asiatic Society, he is also guest scholar at the Islamic Museum, Doha, and lectures at the SOAS and the Victoria and Albert Museum in London, the Aga Khan University, and The French Institute, Cairo. He is currently working as a consultant for the Al Sabah Collection, Kuwait. He is also the author of Arms & Armour At the Jaipur Court: The Royal Collection.