We welcome Tabitha Blankenbiller to the store on Thursday, March 15th, at 7 pm to read from her debut essay collection. Eats of Eden: A Foodoir (Alternating Current Press).  The book follows a year of attempting to write a novel, and the daily life, occasional revelations, and passions that feed, distract, complicate, and enrich that process -- in the author’s case, constant detours into the kitchen. It’s a book about writing, eating, and surviving in the modern west, from literary hustling at the Doug Fir Lounge, to waiting for life-altering emails around a stew-cooking campfire at Crater Lake. The book is a combination of memoir and essays about food, writing, coming-of-age, family, sex, self-esteem, and above all, overcoming personal odds to live your best life -- complete with recipes that will change your relationship with food forever. Most of the essays are set in and around Portland and feature “cameos” by local favorites (such as a lunch date with Chloe Caldwell, a mean risotto cooked up by Susan DeFreitas, and a fateful retweet from Cheryl Strayed).

Blankenbiller has been involved in the northwest writing community for some time, beginning with her MFA from Pacific University in 2012. Since then she has participated in many local readings including Unchaste Readers, Grief Rites, Burnt Tongue, and Orpheus, and she emceed The Rumpus/Future Tense/Forest Avenue Press Lit Crawl reading last fall. She was a columnist for the Pacific Northwest feminist writing collective PDXX Collective from 2013 to 2015 and has had her essays published in Catapult, Electric Lit, Vol. 1 Brooklyn, The Establishment, Barrelhouse, Brevity, and Narratively, among many other journals. Blankenbiller grew up in Washington State and currently lives outside Portland. 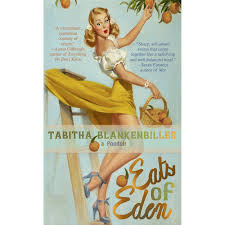 By Alternating Current, Tabitha Blankenbiller
$14.99
ISBN: 9781946580023
Availability: On Our Shelves Now as of 24 Hours Ago
(This book cannot be returned, even for store credit.)
Published: Alternating Current - February 6th, 2018